Fifteen Days After The Storm 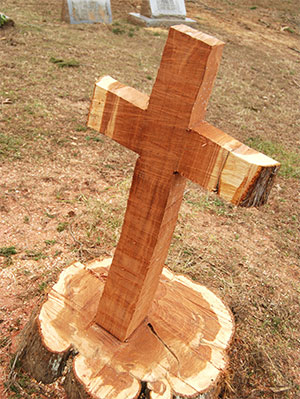 Carved into what remained of a cypress tree, this cross stands as a testament that the Beverly CME Chapel will be rebuilt.

Clean up at Mr. Clyde Driver’s home. Heavy equipment was brought in to clear what was left of the structure. 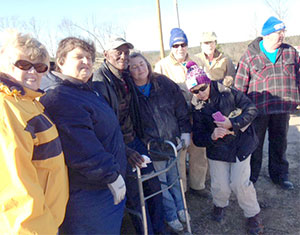 Mr. Driver lost his home in the tornado. The SCN Disaster Relief Team was SHSM’s first responders. They worked alongside Hope Reigns, AmeriCorps to complete demolition and debris clean up for Mr. Driver and others in the area. 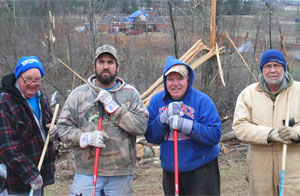 Four SCN volunteers assisted with the debris clean up at Beverly CME Chapel. 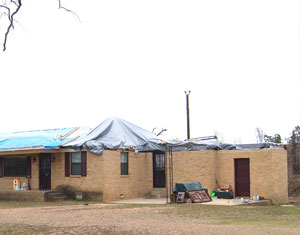 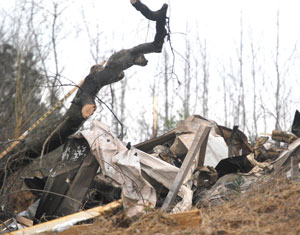 Above top, the remains of Mrs. Rayford’s daughter’s trailer. 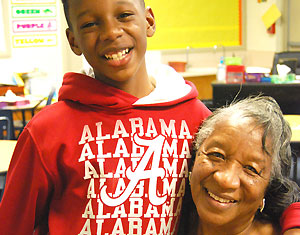 Above, Mrs. Rayford and grandson Jayden.

A wave of good Samaritans descended on the Holly Springs area after the tornado hit the city a few weeks ago. The Red Cross, FEMA and thousands of volunteers from near and far made their way to the town to lend a hand. In a flurry of activity, the First Baptist Church became a clearinghouse of sorts for volunteers to sign up. Mississippi Knights of Columbus, working along side state and county agencies, funneled the workers to hard hit areas to assist with clean up.

Now that the headlines read of other tragedies, the relief headquarters have been dismantled at the community’s multipurpose building and donations have been moved to the National Guard Armory across town. Though some volunteers remain, the masses have moved on to other worthy projects.

Wanting a glimpse of how clean up efforts were progressing, I decided to take a look on the west side of town. The main highway was still a bustle with all sorts of heavy equipment. Many of the homes with catastrophic damage had already been bulldozed. What was once a scenic drive with massive trees shadowing both sides of the road was now barren. The tornado’s long path cut through the countryside like a hot knife. Nothing familiar remained.

I turned down Old Highway 4 in order to catch up with the Sisters of Charity of Nazareth (SCN) Disaster Recovery group. Driving all the way from Kentucky, this group of 10 spent the week sawing, raking, burning and doing whatever else they could to assist residents in this tragedy. Oddly, as I made my way down the winding road, I didn’t see much in the way of damage, with the exception of a downed limb or two. Just as I topped a hill, I saw the group’s trailer and pulled in. From there it was a different scene. The rolling landscape had hidden the terrible destruction. It was quite a shock. There was much more damage than the main highway had given up. The SCN volunteers, along with another group from AmeriCorps, had sorted the debris of what was once a church by type of building material — metal here, wood there, each ready to be hauled away.

From the churchyard vantage point, one could see the wide path cut by the angry storm. Clusters of workers were cutting through the gnarled mess of trees and homes and using heavy equipment to bulldoze what was left. The Holly Springs Utility Department was busy righting electric poles and hanging wire where they could.

I spotted a man standing next to a large dumpster full of bricks. He gazed at the barren landscape that was once his house of worship. The man's name was Clint. He had just gotten back in town. An over-the-road truck driver, he had not seen the damage to his church. “I had to come and see it for myself,” Clint said. “I never imagined,” his voice trailing off. Only two sets of steps and a cinderblock outline remained. Gravestones of the faithful dotted the hillside, many toppled by the winds. Wedged in one of the cinderblocks was the wooden cross that crowned the building in better days. “One of the church members told me that the whole building was flattened, except for the piano,” said, shaking his head in disbelief.

The air was thick with smoke from burning wood. Smoldering heaps sent up puffing white clouds as far as the eye could see. A stack of tree trunks was neatly arranged in a pile, 8-feet high and 20-feet long, waiting on a logging truck. Close by, a stump with a cross, carved with a chain saw, stood in the churchyard. It spoke as a powerful testament of faith that the Beverly CME Chapel would be rebuilt.

Four SCN volunteers were still busy raking debris into large piles. Michael extended a warm greeting. He explained that his group had been working at the job all day. The day before, the volunteers had cleared a site across the street for an elderly man whose home had been completely leveled. Williams stated that the volunteers would be back in the spring to possibly help with rebuilding projects associated with the tornado damage.

For this community, cleaning up will be a long process. Rebuilding, even longer. For some, it is a question of if they can. For the 86-year-old man that lived across the street from the church, it is still up in the air. Mr. Driver’s home wasn’t insured. On a fixed income and in poor health, he was not able to afford insurance. When the tornado roared through, it took everything but his vehicle. His emergency stipend for the hotel ran out last Wednesday. He slept in his car the night before coming into our social service office for assistance. Mr. Driver has no family locally and FEMA will not render a decision about providing him a trailer until sometime next week. What will happen if they decide not to assist him? Such is the story for many of the people impacted by the storm.

A few miles down the road sat Holy Family School teacher Ms. Rayford’s home. Curiosity got the best of me and I had to get a firsthand look. After once again being awed by the mangled remains left in the tornadoes wake, I caught up with her after class.

Mrs. Rayford said she had gone to a luncheon in Collierville the afternoon of the tornado. Her daughter Stacey was at work. Her daughter-in-law, visiting from out of town, was babysitting Stacey’s two boys. Mr. Rayford stepped out for a burger, knowing the ladies were out having fun. Late that afternoon, Mrs. Rayford and her daughter-in-law were making their way home in their respective cars and were just north of the first Holly Springs exit when the tornado warning was issued. Speaking to each other by cell phone, the two ladies pondered what to do. It was apparent that they could not outrun the storm, nor could they make it back home. They decided to seek shelter with the first people they could find.

Mrs. Rayford called Mrs. Daugherty, another HFS teacher. “Are you there,” she asked in a panic. “Yes, I am,” said Ms. Daugherty.

“Well come open your door!” Rayford said, and ran into Shirley’s home, where they both took cover. Her daughter-inlaw also took shelter in a friend’s home not far away. After the tornado hit, they could not return home. Trees and power lines were down everywhere. It would be Christmas Eve before they could make it back. The Rayford’s newly renovated home looked as though someone had taken a can opener and peeled back the roof. All of the family living space was exposed — kitchen, living room, den, as well as the bedroom where her granddaughter stayed.

Daughter Stacey’s trailer next door fared even worse. The violent winds had picked up her trailer, turned it over and dropped it on its roof leaving it beyond repair. Stacey, unfortunately, has no insurance and was unable to salvage even her clothes.

Brother-in-law Eddie’s home on the next lot was also hit hard. Disabled, Eddie dodged the storm the best he could. He was extremely lucky. The tornado destroyed everything but the room where he took cover.

The Rayfords are now staying at a motel in town and taking things one day at a time. Stacey and her children are as well. Eddie has already found a new residence. According to Mrs. Rayford, insurance, she thinks, will take care of most of her home repairs. Her challenge at the moment is finding temporary housing. Competition for the few available homes and apartments is fierce.

To look at Mrs. Rayford, with her wide grin and gentle demeanor, you would never know that she and her family have been through such an ordeal. When asked how she was doing, she said, “I feel guilty. I have a maid (at the motel) that comes and makes my bed and brings me fresh clean towels everyday.” She exhibits a delightful attitude in the face such tragedy.

“We are so grateful for all the support and prayers we have received,” Mrs. Rayford continued. “We are blessed.” When asked if there was anything we could do for her, she grinned and said that they have all that they need. She simply asked if someone wants to help, to please help her daughter.

Give a gift to help families devastated by recent storms