Tis The Season for Volunteers

Summer is finally here! School is out, much to the relief of teachers and students alike. Vacations are at the top of the list, but in addition to planning for beach or mountain getaways, many people have decided to spend a time in the Mississippi Delta with Sacred Heart Southern Missions’ Volunteer Program.

Local and long distance guests have rolled up their sleeves over the past few weeks to lend a hand on a number of rehab projects. The amount of work that has been accomplished is phenomenal.

Volunteering as a family 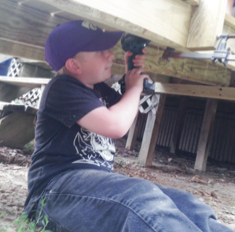 The Dickens family, who attend Queen of Peace in Olive Branch, is no stranger to SHSM. Earlier in the spring, Mom, Crystal, Dad, Paul and their four youngest children, helped plant seedlings at the Garden Cafe in Holly Springs. Cafe guests were able to see and eat the fruits of their labor, as the first eight bell peppers were harvested last week. Soon, squash, peppers, carrots, beans, cantaloupes, and tomatoes will all be on the menu!

Itching to get their hands dirty again, the Dickens helped construct wheelchair ramps for two of our clients and have plans to work on roofing, plumbing, painting and Sheetrock projects in the upcoming weeks. Crystal said that it was a real blessing to work with SHSM and was pleased to be able to enrich the family with a service experience. “We were looking for an opportunity for the family to work together. I made lots of calls and many were accepting of us adults, but thought the children would get in the way,” said Dixon. “Sacred Heart welcomed all of us with open arms.”

The Young Men’s Retreat group at Celia and George’s home. This group caulked and put up sheetrock on the interior.

In addition to families, we have been blessed with the youth of our six parishes contributing time and talent to our many projects. This past week, 20 young men, along with a hand full of chaperones, made a decided difference at three client homes, the Garden Cafe and Dehon Village.

From painting and sheet rock to plumbing and cooking, these teens got a real workout, but also benefited from the service experience. Ryan Harra of Queen of Peace parish said he was surprised that there were so many people in need so close to home. Another commented how he took ‘the little things’ for granted until he saw how little others had. First time retreat participant and Eagle Scout Lyndon Meng put part of the scouting oath into action. The oath reads: “Many people need help. A cheery smile and a helping hand make life easier for others. By doing a Good Turn daily and helping when you’re needed, you prove yourself a Scout and do your part to make this a better world.”

Though this was his first time with the SHSM Volunteer Program, it is not his first time making a difference with his work. Last year, as his Eagle Scout project, he raised funds and refurbished the grotto at St. Gregory parish in Senatobia, where he is a member.

But it was not all work and no play for the retreat participants. Evening respites of bowling, swimming and a cookout rejuvenated the young men for the week’s work. The experience for them culminated with the Feast of the Sacred Heart Mass and celebration at Christ the King—a fitting end to a week of service.

From Chicago to Memphis, this group of more than a dozen high school students from the Seniors Rising group and chaperones made their way to two jobsites and two wonderful transformations for our clients. Both homes received much needed repairs to rotted areas of exterior wood and good coats of paint all the way around.

Catching up with half of the Chicagoland youth at one jobsite, we ran across Holly. Holly is a 68-year- old veteran chaperone for St. Ignatius and has been volunteering for their “summer immersion” for the past 17 years. Despite her family’s request to slow down, she is determined to continue until age 70, when she plans to ask her family to join her on the volunteer trip as their “birthday present” to her.

Another volunteer, 17-year-old Jack, perched atop a ladder slathering paint on carport trim, stated it was his first time with the group. He said he had enjoyed his time so far and was pleased that he had been able to meet the elderly lady for whom he invested his time. Jack’s only concern was that no one had told him that the volunteer house in Holly Springs was haunted. A mischievous giggle was heard from the general direction of Associate Volunteer Coordinator Kelly. Jack further explained that his arms were covered in toothpaste when he awoke the day before and that his roommates had “no idea” what had happened. He downplayed his toothpaste specter fears, saying that he couldn’t wait until the next morning, knowing that Kelly would be making biscuits and chocolate gravy for the group then.

St. Ignatius has sent volunteers to SHSM for more than a decade. Phoebe, Isabel, Matt, Colin , Cathline and Vince spent the week re-glazing windows and painting a home south of Olive Branch as part of the volunteer experience.

Just north at another client site, Isabel was fighting wasps and heavy humidity as she coated a window sash with paint. Her group repaired and re-glazed all of the windows and tackled an all-wood exterior thirsty for a good coat of paint at an early 1930s home north of Red Banks. Isabel shared that this particular day was her favorite, as the group was able to bring a project to fruition. “Being able to see how your work helps people is so rewarding, and is the Jesuit way,” she said. (St. Ignatius was the first Superior General of the Jesuit order of religious. Part of Jesuit formation is the undertaking of service specifically to the poor and sick in the most humble ways.)

These are just some of the volunteers that have made a difference recently. As we speak, the Young Women’s Retreat is well underway and another group of clients are being assisted. And to think, this is just the beginning of the summer volunteer season!