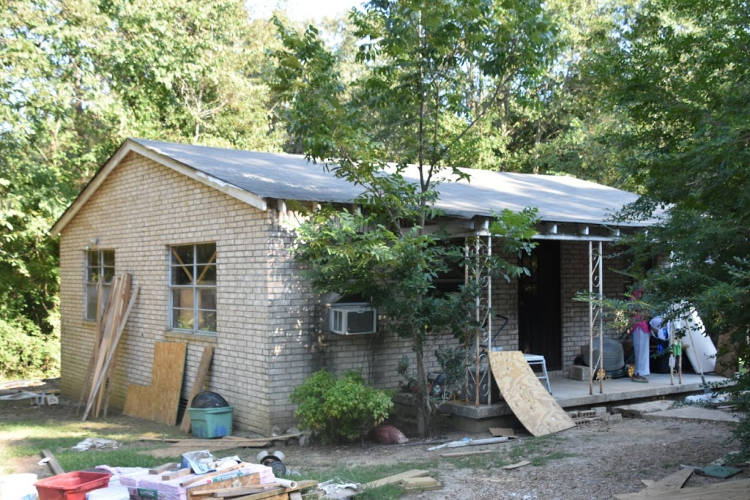 From a distance, one would never imagine the home’s state of disrepair. The white brick surround hides a myriad of problems. Through your generous donations and the help of many volunteers, we have been able to begin repairs.

YA'LL COMING HERE IS A MIRACLE!

The roof has been replaced. 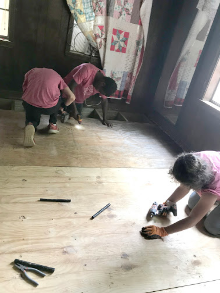 We have repaired and replaced joists and laid subfloor.

“I ain’t never had a good home,” Earnestine says, matter-of-factly. “Don’t get me wrong, I’ve always been blessed, but the places I’ve lived ain’t never been much.”

The elderly woman continues, speaking about how her mother inherited the 700 square foot home from a great-uncle. “When momma died, this came down to me.”

From a distance, one would never imagine the home’s state of disrepair. The white brick surround hides a myriad of problems. Termites have feasted on its original wood structure for decades, causing floor joists to break and sag. In places the joists are non-existent. The plywood floors sag and walls droop six inches from the ceiling in some spots. Disintegrating shingles dot the roof. The laundry list of damage from these issues alone is extensive.

Living in these conditions is dangerous. It is a wonder that Earnestine hasn’t suffered a significant injury due to the deteriorated state of the structure.

But this is home.

Earnestine has endured many setbacks in her lifetime, including kidney cancer and a nervous condition. Just like her home, you would not know of her physical struggles at first glance. Her pleasant disposition is the first thing one sees. Her bent posture, the curvature of her ankles and gnarled feet are only apparent when she rises from her chair and reaches for a cane. Arthritis has taken a tight hold of her body.

Like many of the elderly and disabled poor, Earnestine has no money to make repairs to her home. With her small Social Security check, she struggles to balance the money needed to eat, keep the lights on and purchase her medicine. Often, it is not enough for even these basics.

When our Volunteer Program staff contacted Earnestine a few months ago, she was overjoyed, “Ya’ll coming here is a miracle,” she cried. “I thank God for all you’re doing.”

Teams of volunteers began working on Earnestine’s home earlier in the summer. The rotten wood has been removed. The floor joists have been sistered or replaced and new plywood has been installed as a subfloor. For the first time in years, Earnestine can walk all through her home! The rotten bathroom was demolished and a new one is taking shape. A new roof covers the tiny home and will keep Earnestine nice and dry.

Though there has been much accomplished, there is still considerably more to do. According to SHSM Jobsite Foreman Richard Barksdale, it will likely be a few months before the repairs are complete.

But that’s ok. For Earnestine, she is watching a better tomorrow unfold right before her eyes.