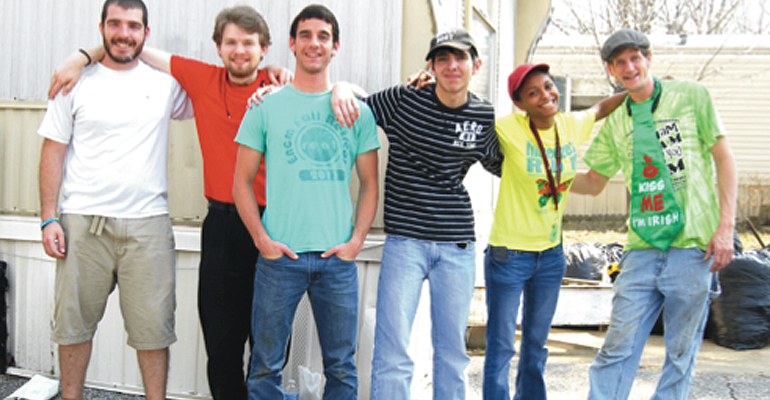 With the volunteer’s spring season underway, there has been a flurry of activity on the home rehab front. Several larger groups have been in residence as of late, including one from Florida.

Most of the groups that have visited over the past few weeks have been on spring break. Ahhh, spring break: the annual recess from routine that is usually all about unwinding. It’s playtime! Sunshine, warm weather, the beach, right? As the parent of a 19-year-old, I can say with the utmost certainty that “work” is a four-letter word that is not uttered during that week of respite.

So, what would make a group of college students, from Florida no less, want to come to cold, gray, dreary, muddy Mississippi and work for a week? I had to ask the question.

The students I’m talking about are members of The Catholic Ospreys, an official University of North Florida (UNF) student organization and Catholic apostolate run by UNF students under the assistance and spiritual advisement of clergy from the Diocese of St. Augustine, Florida. I was privileged to meet these young people and spend some time with them on several jobsites last week.

The volunteers had quite a list of projects in front of them. The Ospreys spent time in Walls and Byhalia putting in flooring and kitchen cabinets at two sites, and in Horn Lake on a re-roofing job. They tackled a few other projects and did one heck of a cleanup job in our in-kind storage area.

Early in the week, I found five of them at a client’s home in Walls. They were just about to eat their sack lunches. As they meandered to a common area in the trailer park, Michael, one of the Ospreys, brought me inside and gave me a tour of their accomplishments.

As I looked at the new vinyl flooring, I complimented their work. “Paul is amazing,” said Michael. “We couldn’t have done this without his guidance. He told us everything in detail from the start—he showed us what to do, how to do it and even better, why do it this way.”

As we strolled through the kitchen, Michael continued, “Paul taught us so well that we have a similar project back home and we are going to tackle

it as soon as we get back.” It was clear that Paul had made quite the impression.

I should mention that Paul Smith is in our facilities department. He and his father, Lee Smith, are equally talented with all manners of carpentry and home repairs. Paul assisted the volunteer program last week on several job sites. Such was the lauding of his kindness and expertise by not just Michael, but all of the Ospreys that encountered Paul, that I had to share.

After touring the Ospreys’ work, I joined the rest of the group at a picnic table a few steps away from the home. Completely energized and enthused about their progress, they spoke highly of their experiences so far. They complimented our volunteer housing and chatted about their work.

Between bites of sandwiches and yogurt, I found out more about these young Floridians and the Catholic Ospreys. They have lots of group activities on the UNF campus— bowling, movie nights, ice cream socials, prayer groups and mass. They also meet every weekday at the same time and conduct “Rosary on the Green” in a central outdoor university location. I asked the question, “What makes a young college student want to join a group like this? What makes you want to come to Mississippi on your spring break....to work?” The answers were beautiful, and simple, and deep.

Each had a different perspective and though they said much more than what this article would allow, here are a few excerpts from this incredible conversation.

Chris said he wanted to serve as effectively as possible and be open to what the Holy Spirit is trying to do in him. “Coming on this trip was something that God put on my heart... ‘Go and build my kingdom’ on this trip, so that’s what brought me here,” said Chris.

Matthew shared that he joined the Ospreys because he had an empty feeling that couldn’t be filled. He said going to mass, being open to his faith and going on this mission trip made him feel whole again and gave him a happiness that he hasn’t felt in years.

Jonathan was a little more reserved. His experience with the group and the mission trip has helped him to push his boundaries and explore new things, all while being in a fellowship community that he enjoys.

“I couldn’t think of anything better than helping folks. It changes you slowly,” said Michael, emphasizing the word “perseverance,” citing that he struggled with his faith and wanted to know more. “Jesus fell

three times and each time he got back up, though he knew death was coming. He persevered for us.”

The leader of the mission trip, Janette, said that she had hit a real low in her life. She said she asked God, “are you there?” Then she went on a journey looking for Him. In her words, “You definitely show God’s love and experience God’s love through service. It’s incredible! I definitely recommend if you want to get closer to God, go serve... go serve!”

I hope that each of these young people found what they were seeking in their mission to Mississippi. I can say for sure, that, in my quest for answers, I got much, much more than I could have ever asked for.