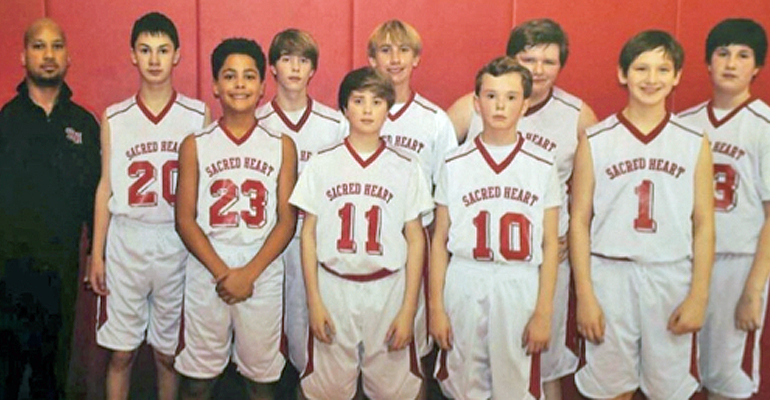 Just Another Member of the Team

This is a letter received recently at Sacred Heart School. It was written by Jeff Bell. He is a member of Queen of Peace Catholic Church and is also the Grand Knight of their Knights of Columbus men’s club. Two of Jeff’s children attend SHS. He has another son, Matthew, who has Autism. He is home- schooled. This story of Matthew’s journey with the SHS Flames basketball team. 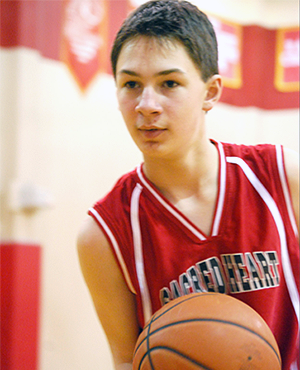 I would like to share a story about a wonderful group of young men who for their last season together did more than put points on the boards. I am talking about the Sacred Heart Flames 7/8 Combo Team coached by Coach Micah and assisted by Coach Bryan. This story could be about how they went from a 0-20 record last year to a 12-7 record this season, but it is not. I would like to say that through hard work and perseverance they won the Bishops Tournament, but they did not. It would be nice to say that they set a new school record in number of wins, three-pointers or free throws, but this is not what happened. As a matter of fact, what these young men did will never show up in a trophy case or on a banner hanging in the gym. What they did went unnoticed by hundreds of people every week over a period of three months and is still unknown to almost everyone who saw them practice and play games. What these young men did was let the Sacred Heart of Jesus shine through them to transform an inexperienced, somewhat awkward young boy with autism who just wanted to play basketball into a driven young man who would become part of the team. The young man is my son Matthew and his story goes something like this.

While we were at Sacred Heart School registering Matthew’s brother Kieran for soccer, Matthew saw a sign about basketball and said he wanted to play. I spoke with Coach Jones, who said when the time comes he knew just the team to put Matthew on. I explained that he knew very little about basketball and seldom played. Again, Coach Jones said I know just the coach for Matthew. Time passed pretty slowly and since Matthew is home-schooled, I thought he would forget about basketball, but he did not. Neither did Coach Jones. When the day for his first practice came, we had to go buy new shoes and shorts—Nike’ of course—and rush to practice. On the way, I explained to Matthew that the boys on this team will not be like what he is used to. These boys do not have autism, Downs or use a wheelchair like the other kids he usually plays with at Field of Dreams. These boys are “typicals” and do not have any disabilities. I asked Matthew if he wanted to tell the other boys about his autism or did he want me to. There was no response so I waited until we arrived at practice and I asked again. Finally, Matthew said, “I will let you know.” To my surprise that conversation never took place and the boys on the team soon became more than just “typicals” or strangers, they became his mentors, his teammates and his friends. Before practice, I told Coach Micah and Coach Bryan about Matthew’s lack of experience with basketball and about him having autism, but we said nothing to the team. Coach Micah said he had rather coach an entire team of Matthew’s who had desire to learn than a team of experienced kids, not much teaching required there. Later after practice, while I was concerned about how Matthew would be treated and comprehend the game, all he was concerned about was making the team. I guess it was not clear to him that he was already on it. Each night after practice we would stop by Sonic for a vanilla shake (no whip cream or cherry) and a sweet tea. It became a ritual. We would talk about practice, his new friend Coach Micah and the players who attempted to help him that night. He would end by saying it was a good night.

From the first practice, Matthew’s enthusiasm and determination to learn and play the game was very apparent and infectious. Even though he could not run as fast, jump as high, dribble at all or shoot very well, he was quickly becoming an inspiration. Obviously not because of the things he could not do well, but simply because he was trying. I have never been more proud. I remember walking into the gym one time at St. Louis with Matthew and hearing his teammate Jon Jon yell out, “Matthew, come sit with us.” I almost lost it emotionally. Matthew’s will to not give up and his team’s open heart allowed Matthew to become an integral part of the team.

As the season went on, the practices got harder. One night Matthew was slammed to the floor while getting a rebound. Then he ran into a stack of folding chairs while chasing down the ball. And finally, he was hit in the face by a stern and quick pass. I thought we were going to be leaving for sure, but after some cold water on his face and a little pep talk from dad, Matthew was back on the court. He began to get more game time as our team scored more points. Matthew would get nervous and miss his shots but it was a team effort. Everyone wanted him to score. It was not until the last tournament that I realized how much the team meant to Matthew. During a previous tournament the game was so close Matthew did not get to play. Coach Micah apologized to Matthew and me for not getting him in to the game. I understood the hard choice that was made, but I was not sure if Matthew did, even though he said it was OK. On the way to the Bishops Tournament, I told Matthew that there may come a time that the score will be so close Coach Micah may need to keep the older, more experienced boys in the game if we are to have a chance to win. I asked Matthew if that time comes did he want to sit out or have me ask coach to put him in so he can play. Matthew began shaking his hands in frustration saying I hate these decisions; it’s not an easy answer. After all, he enjoys the game greatly. After about 30 seconds, Matthew turned and looked at me and said I want my team to win. I got a lump in my throat as I hugged Matthew and told him how proud I was. Matthew got to play in the remaining games, even the last one where we lost. Just being on the court was a win in our book and if he happened to foul someone we would all cheer.

Under Coach Micah’s leadership, the seventh and eighth grade boys not only had a great season, but they became more in tune to the needs, desires and dreams of those who live in this world we call autism. During the year, Coach Micah also organized a fundraiser for St. Jude that allowed the team to play basketball at the FedEx Forum and watch a game later that night. A few players even got their pictures taken with the cheerleaders. Matthew eventually overcame his shyness.

Since the season’s completion, Coach Jones and Coach Micah began coaching kids from Special Olympics Monday night and Matthew is right there with them. This is Matthew’s first year to be involved with Special Olympics, but he is no longer new to basketball. I wanted to recognize the players and coaches that made such a big impact on my son Matthew and our entire family. Thank you Coach Jones for allowing Matthew to play in your program and for your dedication to all our children. Thank you Coach Micah, Matthew’s mentor and friend, for all that you do to inspire and teach our children. To the young men listed above, thank you for being the hands, feet, voice and heart of Jesus Christ on and off the court.