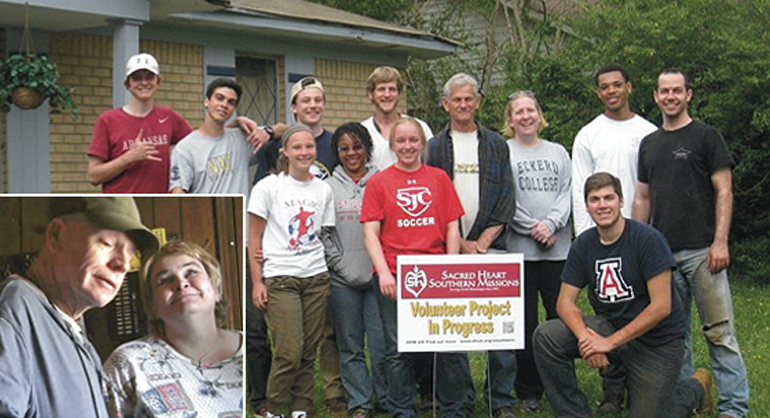 We've Got You Covered!

On a visit to the Walls food pantry back in December, Celia inquired about home repairs, hearing that we provide assistance for those in need. Celia explained that she and George really needed help. 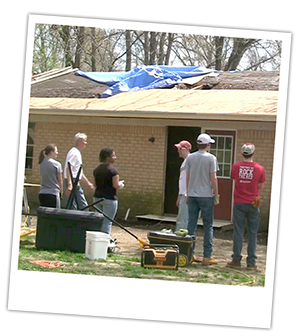 After several questions, it was determined that the home was in extremely bad condition. They were not physically or financially able to do any repairs due to George’s life-threatening illness. “The situation is dire and it needs immediate attention,” Celia persisted.

George is disabled. If one could be grateful for a heart problem, it would be George. After an incident that required several tests, it was determined that he had cancer as well. His heart condition and a two-year bout with cancer left him in failing health and without a job but with a mountain of bills. Though working, Celia’s income has not been near enough to tackle the mountain of debt, much less take care of the home repairs.

Our site foreman, Lee Smith (Mr. Lee), visited the home and was taken aback. There were gaping holes in the kitchen ceiling. Looking up, one could see blue sky. The home was open to all the elements; and that was just the beginning. What wasn’t damaged by the roof falling in was ruined by rain that had obviously been coming in for some time. Mr. Lee asked Associate Volunteer Coordinator Kelly to inspect the home as well, citing the damage and expressing his amazement that anyone could live in this environment.

Upon arrival, Kelly found George and Celia huddled around a tiny heater trying to stay warm. Kelly had brought a temperature gauge with her. There was only one degree of difference between the outside of the home and the temperature inside. Old Man Winter had already tightened his grip on the area and another cold rain was predicted in a few days. Something had to be done and quick.

With help from Paul Smith, Mr. Lee and Kelly were able to put some plywood and 2x4s over the holes and place a tarp over part of the home as a temporary fix.

“When it rains, I would be mopping the kitchen and George would be mopping the bathroom just so it would not run into the den,” Celia explained. A volunteer group came in a few weeks later and did more work on the home. They replaced the broken rear sliding door with one that was lockable and airtight. Since then, several individuals and groups have worked on the property, preparing it for the new roof. The unpredictable Mississippi weather delayed its installation on more than one occasion. 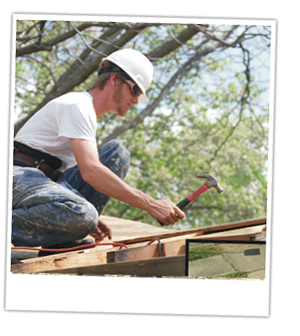 St. John’s College High School came to volunteer during Holy Week. Their main project was George and Celia’s roof. The group of eight high school juniors and seniors and their chaperones had a warm and sunny week to tackle the job. These young people gave up their spring break and traveled more than 870 miles to be of service.

St. John’s had a long week of intense work. Many in the group did not know one another, nor did they know much about roofing. The first few days were spent putting new decking on the back of the house, then adding the felt and shingles. Though unfamiliar with each other and the task at hand, the group caught on very quickly. Two of the volunteers commented that they were surprised that shingles weighed so much. Another expressed sheer delight in learning to use a nail gun and two of the girls found the rolling magnet used to pick up nails most entertaining. 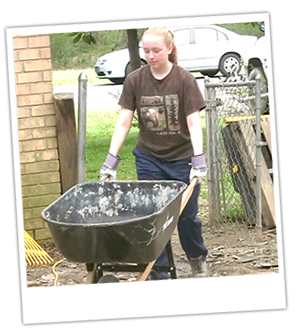 When the group began working on the front of the roof, they discovered that it was in worse shape than once thought. Soft spots and holes made for extra repairs, but that didn’t deter this team from Washington D.C. They forged on, replacing wood and battling the occasional wasp.

By Thursday, the teens had really gotten into a groove and were able to get a great deal complete before their trip to work the Garden Cafe. The St. John’s volunteers made a lot of new friends in Holly Springs. The group was excited to have been able to have another service experience that offered an opportunity to interact with a community. One of the cafe guests approached each of them individually and expressed his gratitude for their time and services.

By Good Friday, the roof was complete. The volunteers said it felt good to have worked hard and accomplished so much.

“The best part of the day for me was when I looked down from the roof and saw Ms. Celia working just like she was a volunteer. It’s so nice to see that she and Mr. George are so thankful,” said Will and Jack.

“We just thank the Lord for you all everyday,” Celia exclaimed, speaking of SHSM and the volunteers. “We are so grateful. There was just no way for us to do these repairs.”

More good is to come for George and Celia. Their home has been scheduled for cabinet, floor and electrical work in the kitchen as more volunteer groups come in.